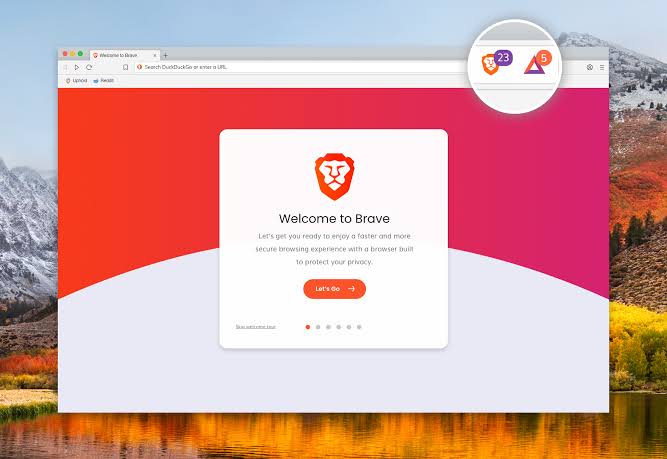 And the rising economy of Basic Attention Tokens

It takes courage to surf the web in a surveillance society, and often the source of that courage is strong encryption. Historically, strong encryption has remained out of reach for the average user. Is that changing now that tools like the Brave browser are making encryption accessible, while also enabling web access to be safer and faster?

When so much of our activities are based on internet connectivity, Brave embraces the vision of the expanded web browser. In telling Chrome to fork off, they’re charting a different course for an app (i.e. the web browser) that we spend many hours a day using. Can Brave carve out lost time amidst our surfing, saving us minutes if not hours? They claim they can, because their software is faster, and the removal of ads dramatically speeds up the browsing experience.

In less than 2 days of normal use, @brave blocked 12,050 ads and trackers. Saving me about 12 minutes time. So each ad and tracker slows down the loading of a website by about 0.06 seconds.

This issue of Future Tools builds off our first, which looked at Keybase, and our third, which focused on Tor (and the so called dark web). Like Keybase, Brave makes the use of encryption easy, and also operate their own cryptocurrency. Brave also makes it easy for people to use Tor, connect to the dark web, or just protect your surfing and web history.

Metaviews member Corvin Russell posted a comment on our Tor issue mentioning the Brave browser. Similarly Metaviews member Felix Stalder has been regularly tweeting about Brave. This is partly why I see so much value in the Metaviews network. Together we help each other become smarter.

2019 was a crazy whirl of breakthroughs for the San Francisco based startup. In 12 months, Brave officially launched its browser following a long beta, it’s rolled out its Basic Attention Token to a score of countries, and it’s enlisted 350,000 publishers on its Brave Rewards platform. Just last month, Brave browser’s user base hit 10 million—admittedly, that’s not a patch on the billion plus users of Google’s Chrome browser, but hey, they took a decade to get there.

It feels disingenuous to call Brave a browser, when it’s ambitions seem to extend well beyond what we’d associate with web browsing. Instead this is a company that seeks to disrupt the disruptors. They want to change the business model for the media industry, and they see the web browser as the vehicle to do so. Or at least start.

The two co-founders of Brave are no strangers to the web world. Brendan Eich is the creator of JavaScript, and a co-founder of Mozilla. However Brendan is also notorious for his support of a California voter proposition to ban gay marriage, which was partly why he was forced to resign as CEO of Mozilla.

Brian Bondy is another Mozilla veteran and is based in rural Southwestern Ontario. They started Brave five years ago, and are now finding their stride, while offering a timely vision of how the web could work.

On the one hand, this includes privacy by default. On the other hand, this means an advertising system that incentivizes people to view ads, rather than compelling them to.

Brave, the company built on dislike of ads, launches its own ad network https://t.co/vTcFP71FK1 pic.twitter.com/i6M1MrZrwe

70% of the revenue will be directed towards ad viewers, who can choose whether or not to receive ads, and doing so will mean rewards in the form of Basic Attention Tokens (#BAT). pic.twitter.com/sk2sRxVQA4

Which is why I have trouble describing Brave as a browser. Is it software? Is it an attention marketplace? Is it an ecosystem? Is it a society? Perhaps the answer depends upon the value of currency?

#BasicAttentionToken is currently stuck within a range, as $BAT has failed to surpass the important $0.20 price level. However, if BAT breaks upwards from this range, it could aggressively climb up the #cryptocurrency market cap rankings.https://t.co/dDoRZBw6WD

We’re still in the relatively early days of cryptocurrency and the digital transformation of money, yet we may be reaching the point in which some of these emerging systems scale or fail.

In Brave’s case, they’ve created their own currency, $BAT, or Basic Attention Token, which is itself based on the Ethereum blockchain network.

BATs are rewarded to Brave users for a growing range of activities, primarily viewing ads, but also promoting Brave and encouraging others to use the software, or network, or service, whatever it is we believe Brave to be.

Hey! If you use the new Brave browser for 30 days, they’ll fund my channel with a bonus! Here’s the link: https://t.co/hwDCrQ5JTb

While anyone can create a currency, that currency’s value is reflected in the ability to earn and spend that currency.

On the one hand, Brave is trying to transform the media industry by both changing how ad networks operate (so as to be consensual and respectful of users privacy and attention) as well as how content creators get paid for their work. This also incentivizes people to use Brave, as content creators won’t receive payment unless they too are part of the network.

It took a month, but the $50 in Brave Rewards I found out I had when I signed up for it went through, so I’m gonna start tipping people in BAT for their tweets. You’ll never know if I tipped you unless you get Brave browser and get the built-in crypto wallet set up, so get on it.

On the other hand, Brave is also increasing the value of their currency and the reach of their network by establishing partners who will accept $BAT as payment.

Wow. So basically you can earn tokens by watching ads, using the browser and redeem them for a network of goods.

All of this sounds great, but it does raise the question of how such an economy or marketplace is playing out. Part of what is confusing or sketchy about the emergent cryptocurrency market is that there are so many of them.

While Brave certainly appears to offer an interesting value proposition to advertisers, web surfers, and content creators, who are the people embracing and using it?

Working with @brave we’ve been able to drive thousands of new users to use Brave browser and view ads, and vice versa with many Brave users watching https://t.co/6Tk7ZrWJNy and earning TFUEL for the first time! Looking forward to more collabs with Brave team and our communities https://t.co/0RMbtWgbkU

However when part of the mandate is advertising and funding content, the crucial question is what is the content being funded.

1/3 What’s going on with “Brave Browser”, being heavily promoted on Brexiter channels? It claims to be a browser that blocks ads & website trackers. It tempts users with opportunities to earn “Basic Attention Tokens” (BAT) exchangeable for cyber-currency by watching ads… pic.twitter.com/1kowz8lumV

2/3 It also seems to be funneling cash towards “Brexit MPs”. The US corporation behind it was founded by Brendan Eich, who resigned from Mozilla after it emerged he’d been funding the anti-same-sex marriage movement in California.https://t.co/VAsp5mfV9a pic.twitter.com/feHkPGUwXu

It’s not just “#Brexit MPs”. Brave Browser is also being advertised as a channel through which to fund the neo-Nazi group Nordfront (Nordic Resistance) in Sweden, and in Finland, where the group has been banned following violent attacks on anti-racism and gay pride demonstrators. pic.twitter.com/WZjkoKlTxV

For the record, @BrendanEich of Brave Browser informs me that Nordfront has been removed as an affiliate, though it continues to advertise the browser on its site. No info on “https://t.co/Sxgbs6uH4y” is forthcoming. It would be interesting to see a full list of Brave affiliates.

The question of who uses and benefits from such a network is crucial when deciding whether to support it.

Brave is certainly worth keeping tabs on, especially as they move forward with their cryptocurrency plans, making it easy for users to not only use $BAT, but other currencies as well. Though that may create conflict with their users who desire privacy or anonymity.

Although Brave is not the only option for finding courage. There are many alternatives, with more emerging daily.

Brave is a “fork” of Chrome. I.e. it shares some of the same software with Google’s web browser, which is open source. What’s great about open source software is that anyone can create a fork. Thankfully many people have.

I think Brave (current desktop browser) is a step in the right direction .v. incumbents but #ILP is the secret sauce to propel @PumaBrowser.

Brave opened the door. Puma will take it further.https://t.co/pM0btSfw6n

What do you think? Do you use Brave? Would you? Do you collect or spend $BAT? Will you? What’s your experience been so far?

This is our sixth issue in the Future Tools series.

The first was on Keybase, a service designed to make encryption easy to use. The second was on Pi-Hole, free and open source software designed to make it easy for you to block the digital advertisements on your network(s). The third was on Tor and the so called dark web, enabling secure surfing for all. The fourth was on Matrix and Riot as an alternative to Slack. The fifth was on democracy.earth and quadratic voting.