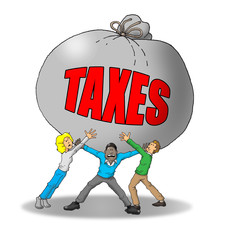 The internet is a pretty stupid place to pass a tax, and the US looks well down the road to passing one.

What lawmakers fail to understand is that taxation specific to the internet, ostensibly to boost revenues into government coffers, in practice will probably diminish them as US businesses lose competitiveness against foreign companies.

To our American friends, easyDNS is a foreign company, so don’t let us stop you.

We are queuing up an email right now to send to all our US customers and once it passes we’ll remind everybody that we’re not a US firm and thus we will not be collecting said Internet taxes. We’re really happy about that, and the bigger the tax, the happier we’ll be.

Those who know me may be puzzled by this stance, given that we’re traditionally anti-big government,  pro-free market, pro-capitalist whack jobs, but hey, business is business – if a bunch of inept policy makers with no grasp of rudimentary economics want to hamstring my American competition (especially the big ones) and force an artificial price increase on them that I can undercut by doing nothing, then by all means pass that internet tax. My daughter will thank you when she heads off to Julliard in about 10 years – I heard that’s expensive.

Politicians may be surprised when they see  that taxation, like censorship, will be treated as “damage” on the internet, and ecommerce will simply “route around it”. It’s one thing to have Good’s and Services taxes (like we do here in Canada and over in Europe), which basically applies to everything, a straight up internet tax will have the distinctive characteristic of singularly harming every affected business within the jurisdiction passing the tax, eroding competitiveness at the national level.

What will probably happen is that affected businesses will have to “eat” the tax and drive their margins down, with all the accompanying side-effects of that – like layoffs, downsizing, outsourcing, offshoring and all that stuff that plays really well with voters.

It’s like some weird bizarro world where the more governments try to intervene and “manage” any given economy the worse-off and more unmanageable it gets. Go figure.