Yesterday New York Times columnist tweeted an astonishing comment, saying that his computer had been hacked and it’s IP address was being used to download child p*rn0graphy. He has since deleted the original tweet, but it had been captured enough times and circulated far and wide. 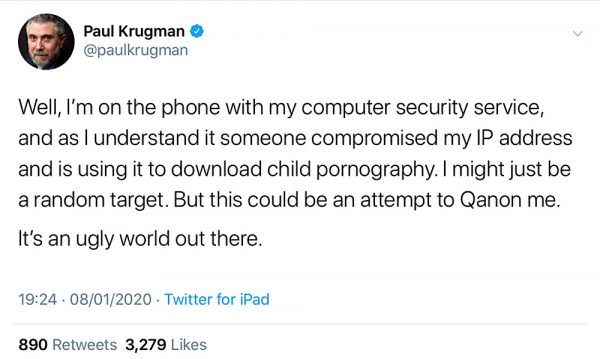 I found it curious, to be tweeting that. However, contrary to the wider immediate speculations along the lines that “he knew he’d been found out and was tweeting to get ahead of the narrative”, I figured what really happened was probably a lot more mundane, and a variation of one of the following themes:

#1) He’d received a variation of the “you’ve been hacked, pay me bitcoin” spam/extortion emails

These have been rampant for years, and something we frequently report on in #AxisOfEasy newsletter. We also wrote this guide which explains how these emails work, where they get a copy of one of your old passwords (if your variation tries that variant) and what to do about it.

#2) Some boiler room telescammers called him

This is similar to the first version but it happens over the phone, when somebody calls you and attempts to bluff their way into posing as your telco, ISP or organization’s security department and after scaring you with an initial outrageous claim, tries to shepherd you into some form of tech support scam for your credit details.

Today Krugman followed up with a tweet that seems to suggest as much….

Deleted original tweet. Times thinks it may have been a scam. Anyway, will have more security in future

Predictably, Krugman has been relentlessly ridiculed. But Taylor Swift got it exactly right (not the singer, the other one. And by the other one I mean not the bond trader, @TayTayLLP, but the other other one… @SwiftOnSecurity)

Update.
It would be fun to endlessly make fun of Krugman after this, but we have massive problems in computing and finance with scam victims not coming forward to get help out of fear and shame.
You want users to feel safe to call IT after realizing they were tricked. https://t.co/kCF2AP7g6b

But where this really starts to bug me is when I see the narrative begin to take on a life of it’s own. Either ideologically opposed outlets running with a variation of “Krugman claims his IP was used to download child p*rn” 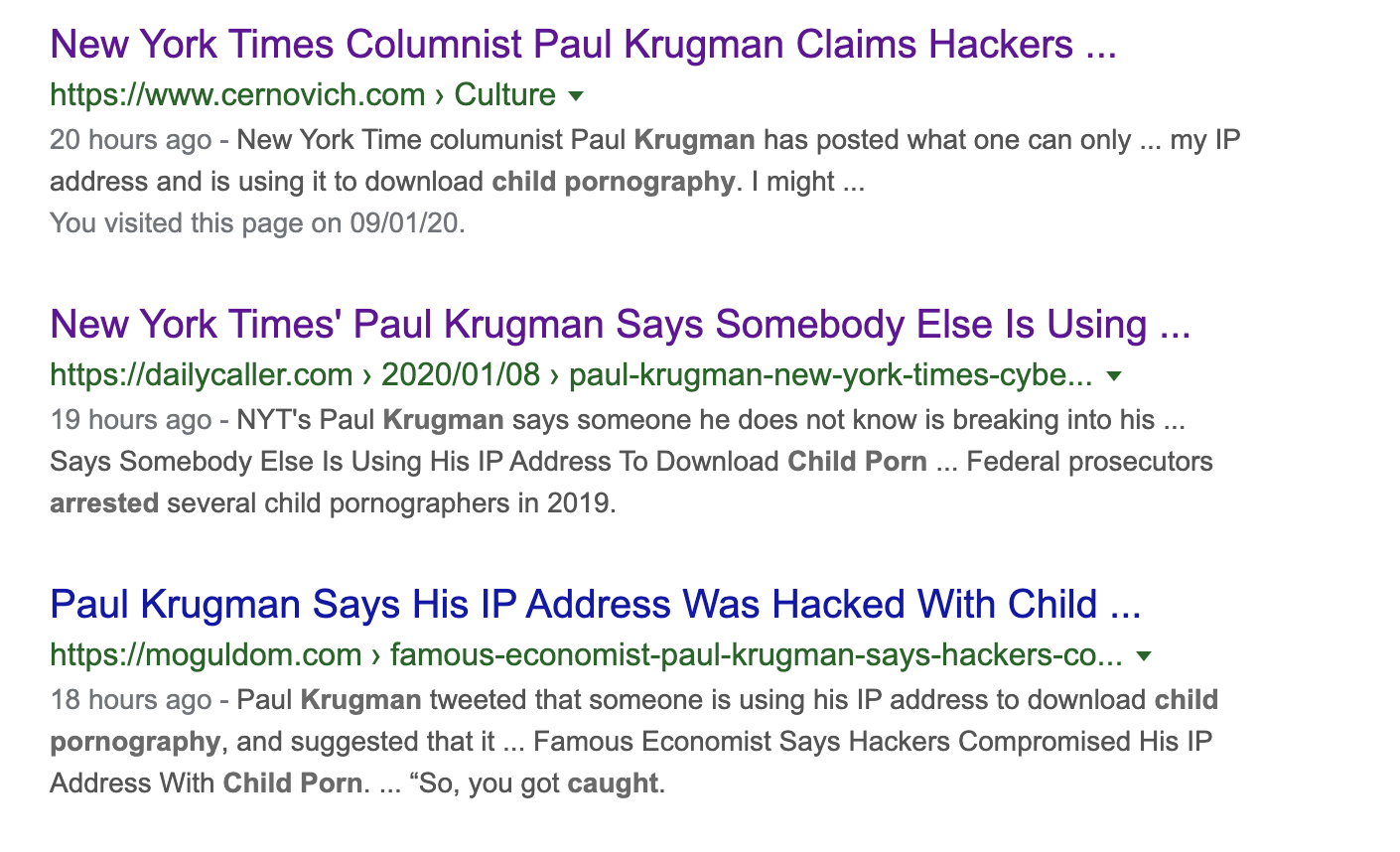 Or, as is probably inevitable, once the news gets beyond the news sphere and into the hands of people who just have an axe to grind, the idea that he was actually caught with such materials on his computer …

…one that is completely devoid of reality and mischaracterizes the situation to the level of defamation. It’s not helpful.

This is not newsworthy

The extent of this episode is “Nobel Laureate gets fooled by a scam. Emits embarrassing tweet”. That’s it.

It’s no secret that I’m no fan of Krugman’s. I disagree with his views on monetary policy. I think Keynesianism is the single driving factor behind the serial bubbles and widening wealth inequality that is rending the social fabric of our society apart. That’s a recurring theme that I wrote about often on my Guerrilla Capitalism blog. But disagreeing with the guy doesn’t mean it’s ok to distort, amplify and bullshit some micro non-event into the next Epstein-didn’t-kill-himself debacle.

There is an entire podcast devoted to debunking Krugman’s economic ideas called “Contra Krugman” (they even have a holiday cruise every year, and one of them wrote an entire book refuting Krugman‘s economics). The guys who put on that podcast, Tom Woods and Bob Murphy, deconstruct his ideas, they don’t demonize him as a human and cackle over his foibles.

Personally, if I were to savage poor Krugman, I’d have done it over his deeply flawed criticisms of Bitcoin, or if it had to be a tweet, I would have picked the one below:

It only make us poorer in aggregate if it crowds out investment — which is isn’t doing https://t.co/tGOKUxzGeq

Because it veers dangerously close into Modern Monetary Theory territory, which is a whole other story. These are more substantive reasons to give somebody grief over. Not his social media miscues.