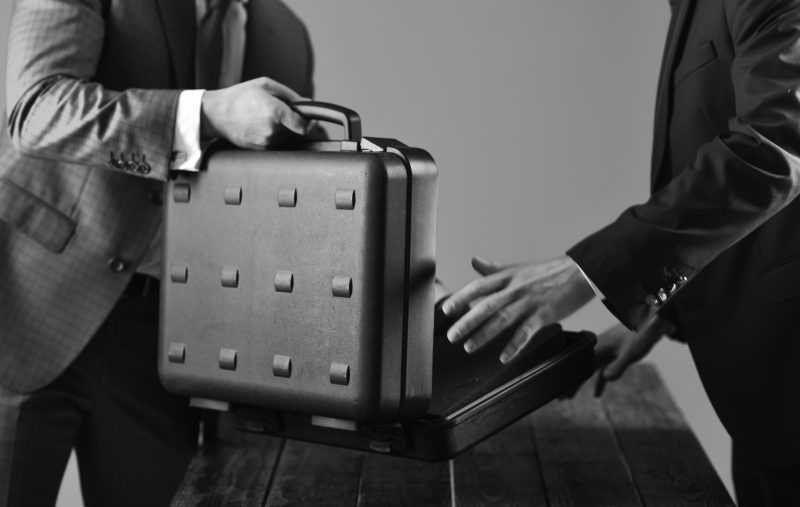 It has been widely reported, and generally criticized, that the Internet Society (ISOC) has entered into an agreement to sell Public Interest Registry (PIR) which operates the .ORG TLD, to a VC firm called Ethos Capital for a reported $1.135 Billion dollars.

I’ve disclosed in previous issues of #AxisOfEasy that I sit on the board of the Internet Society Canada Chapter (ISCC) and had a call with our chair Tim Denton earlier in the week, who himself previously got off a call with ISOC chair Andrew Sullivan.

As I mentioned, ISCC was as surprised as all when the announcement was made. We operate independently of ISOC but have a common purpose: both ISOC and ISCC have core missions of working toward making internet access universal and affordable, of protecting the rights and privacy of netizens and of trying to help policy makers understand how this system of electrical tubes actually works.

ISCC gets a smidgeon of funding from ISOC. Not a lot. It looks more like a token stipend than largesse or payola lucrative enough to impact my views on this. I enjoy and am proud the work ISCC does here in Canada, and I would like that to continue.

The Economics of running .ORG forever vs having “F-you money” now.

As Andrew Allemann reported, and ran down in his DNW article: Ethos is paying $1.135B for the rights to .ORG. The contract is up in 2029, but it has automatic 10-year renewals baked in unless:

.ORG has about 10.5 million names, wholesale cost is currently $9.93/USD, which puts revenues at about $99.3M/year. DNW estimated the cost of operating the registry at $25M/year, leaving roughly $75M/year in profits (although I discovered later, ISOC subsidiary PIR is the actual operator and pays ISOC $50M annually). That’s a whopping 75% net margin overall, which is only possible under quasi-monopoly conditions that is our current naming system, but I digress…

For ISOC, the deal makes them the 40th largest endowment in the world which would put them somewhere between Carnegie Mellon University and New York City’s Museum of Modern Art.

Bear in mind that ISOCs purpose is as a policy advocate, not as a registry operator. The registry was a means to an end to pursue that core mission, and with this kind of money, they’ve come to the conclusion that they can now do this in perpetuity.

Now one might think, as I did, as I typed in the section about the automatic contract renewals above, that having an asset that collects roughly 50M/year (the annual payments from the PIR subsidiary), with guaranteed ten-year renewals sounds a lot like perpetuity to me anyway..

And yet, those of us in the technology business understand viscerally that nothing lasts forever. What seems like a steady cash cow today may be obsolete sooner than anybody suspects. Personally I think even DNS will be disrupted in the future by some kind of distributed ledger technology beyond even blockchain, like hyperledger or hashgraph or some post-singularity quantum foam.

It’s a tough call. I know that despite this, I’m old fashioned and prefer cash flows and annuities over (less-than-enormous) piles of cash. Especially as I’ve outlined in the past, in this climate of zero and negative interest rates and most investment sectors being massively overvalued.

But hey: if  somebody offers you 11X revenues. You’re going to take it. I know I would.

That’s the logic on the sell side. It’s hard to argue with it.

The other side of this transaction smells funny

In July, ICANN amended the registry agreements to remove price caps from the .ORG and .INFO TLDs. The price caps limited how much wholesale pricing could be jacked up each year (going from memory, it used to be something like 7% or 9%) but now those limits are gone.

ArsTechnica reported on the event here, noting that in the public comment period the responses were nearly ubiquitous in their opposition to the removal of price caps. Something like nearly 4,000 opposed, and 6 in favor (my quip in #AxisOfEasy was “and then those six went and started a public equity fund….”). PIR  issued a statement that there were no plans to raise .ORG pricing. Maybe that was true because what they were planning, was something else entirely….

The DNW article noted that in May 2019, Fadi Chehadé’s name appeared on the Whois record for EthosCapital.org. Who is Fadi Chehadé ? Well he’s just the former CEO of ICANN, the body that oversees all these TLDs. Small world. 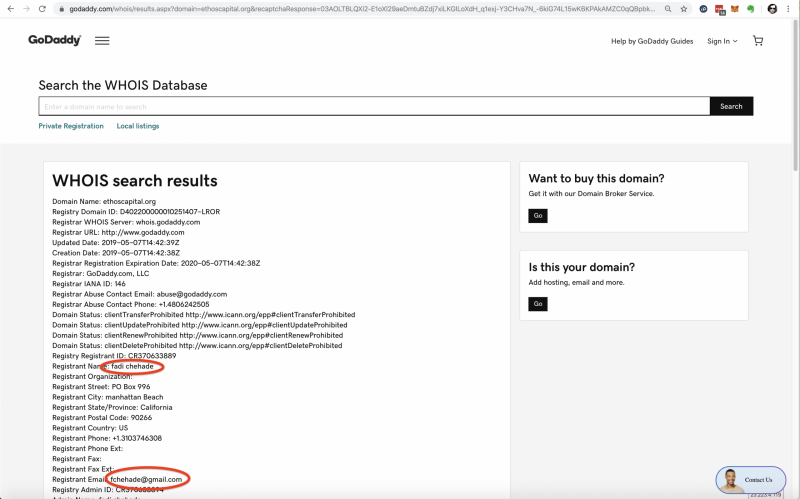 EthosCapital.org is just parked at the moment. The functioning website for Ethos Capital is over on the .com. Can we say for sure it’s the same “mind and management” as the tax authorities up here in Canada like to say, behind both domains?

Well over on the website, we see bios for Erik Brooks, the founder and CEO, as well as Nora Abusitta-Ouri, their “Chief Purpose Officer”… 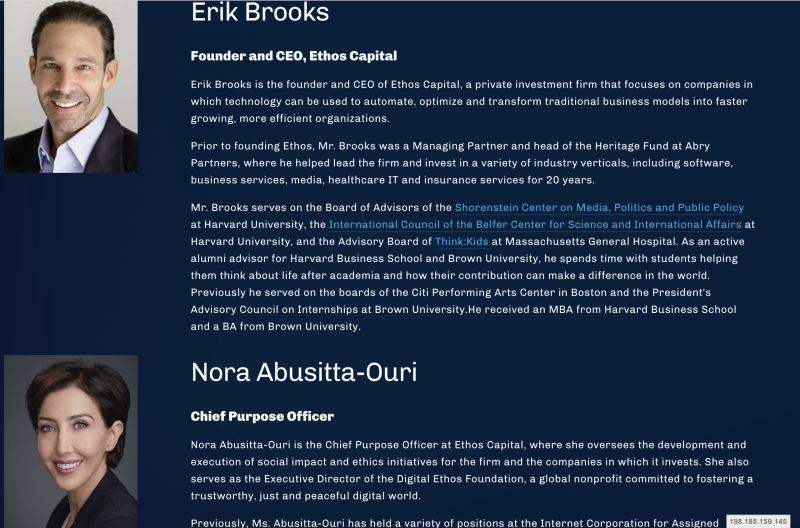 I don’t know exactly what a Chief Purpose Officer for a private equity fund does, but when Nora Abusitta-Ouri worked at ICANN (yeah, ICANN again), she was SVP, Development and Public Responsibility Programs, reporting to Fadi Chehadé. The world is even smaller now.

A few more data points can be found in this filing from Namecheap written to oppose the planned sale. Ethos Capital CEO Erik Brooks was a former managing partner at Abry Partners, a Boston based private equity firm. I did not realize until I read Namecheap’s filing that Fadi Chehadé was

Senior Advisor for Abry Partners that led the acquisition of Donuts, Inc. (the entity that operates the most new gTLDs and also the top 20 registrar Name.com)

(Tangentially, and I find it odd, Abry Partner’s wikipedia page was deleted in August, ostensibly for failing to meet the “notability” requirement. This despite the fact that all the other large private equity firms, like The Carlyle Group, CVC, and KKR  et al, still have their wikipedia pages intact.)

Donuts is the largest gTLD operator, operating a bunch of new TLDs that hardly anybody knows exist let alone reg a lot of domains in. I said from the outset of the great TLD expansion that most of them would be flops and a lot of investor capital would be vaporized. I haven’t been paying a lot of attention to Donuts or the performance of their portfolio, but it seems Allemann’s almost off-the-cuff comment in his article….

Roll Donuts into it, take it public, and you get a nice payday.

Would be a fairly good guess as to what the play here really is. They may not care if .ORG gets renewed past 2029 or if DNS as we understand still exists at some future date, because by then they’ll have cashed out via the capital markets. If I had to predict, they’ll try to rush it out before the 2020 election.

Oh, and by the way, Donuts’ CEO is Akram Atallah. He’s the former President of ICANN Global Domains Division (GDD), I learned this also via the aforementioned filing.

Also, Donuts co-founder, Jon Nevett, stepped down in 2018 to become….. (wait for it), CEO of PIR. The ISOC subsidiary that operates .ORG and is the mechanism by which this sale will occur (See Drew Devault’s letter to the California Attorney General).

Keep an eye peeled for a Donuts S-1.

I think this is the part where I’m supposed to giving the “opinions expressed are my own” spiel, who just happens to be a director to the ISCC (That’s Internet Society Canadian Chapter) and not as a spokesperson for the latter. (You know, the way “just happens to be” is saturated throughout every aspect of this deal).

It does induce cognitive dissonance. When the ISOC position was relayed to me it made sense, to be sure. I had to take a step back and realize that I’m trying to look at this dispassionately, given my position with the ISCC. I like the work we’re doing here in Canada, and I’d like to be able to keep the band together and see that continue. I’ll admit to having in the back of mind a Plan B idea that if ISOC has gone and committed brand suicide then we should just rename ourselves something else and continue on about our mission. Apparently I’m not the only one who is thinking this way.

If it comes out in the wash that there has been any impropriety on the ISOC side then I’ll revisit my position.

To follow how this story develops as more information comes to light, subscribe for updates via our weekly #AxisOfEasy digest.