[ If you’re interested in the backstory to this post, read on, if you want to skip straight to how to get the hell out here, skip down to How To Leave easyDNS ]

I have been listening to Doc Searls’ The Intention Economy lately, it is an amazing book for a number of reasons – but suffice it to say (for now) that the book introduces “VRM” – Vendor Relationship Management. VRM is the natural compliment to CRM and is conspicuous in its absence from most business models. Yet if I may be so bold, it correctly describes the underlying ethos we feel here at easyDNS – where our underlying mantra since 1998 has been To Drive a stake through the heart of Lock-In in all it’s forms.

What makes listening to Intention Economy such a bittersweet experience is that Searls cites a certain internet pioneer a lot, recounts emails he has sent him in the past on key topics, etc. and every time he says the guy’s name I wince because that person used to be a customer here, and we lost him.

We did so in an unceremoniously #fail-ish manner where he came away from it thinking we were trying to lock him in and make it hard to leave. He even tweet-ed as much and I stayed up until about 5am that night making sure he got out transferred out ok but he was not impressed and I am still pretty bummed out about it.

So my experience of listening to / reading Intention Economy is periods of excitement (“hey! we’re a proto-VRM company! this is where we’re headed!”) punctuated by regret and facepalming (“but we screwed up and alienated a pioneer in this way of thinking and who knows how many others…”)

Yes, “lock-in” is the absolute, crummiest business model in existence, it goes completely against the concept of a “free market” and in the end, while companies may appear to benefit from it in the short run, I think it is never a viable, long term business model. This will become more the case as VRM becomes more accessible to customers-at-large. I would say that the only good thing about lock-in is that one can build a lot of neat products and services to circumvent it.

Some time ago a competitor not to be named had a massive DNS outage and we posted to our blog explaining how users of that competitor could implement a workaround that would help them get to the competitor’s control panel (which was otherwise unreachable) and be able to facilitate an escape to some other DNS provider, if only temporarily to get their domains back up until the outage was resolved. Not long after we posted that workaround, said competitor then pulled access to their homepage entirely, making it impossible to effect the workaround (an enterprising twitter user then posted a workaround for our workaround which put people back in business).

Memo to those guys: Take it from us, we’ve had our share of DDoS attacks and alas, the odd outage over the years (3 full-on outages in 14 years totalling about 2.5 hours) – help your customers escape. While your engineering team is restoring functionality, task some front line support reps to get as many of your customers as possible into lifeboats, do whatever it takes to get as many of them out of the way, online and back up. They will thank you for it, many of them will come back as soon as normalcy returns  – and it’s the right thing to do.

How To Transfer Out of easyDNS

Besides being documented over here, we’ll outline it right here as well

Unlock the domain – the domain lock used to be accessed via the non-intuitive “whois” editor, until now where you can also get it via the “Domain Security” line under the Domain Admin tab: 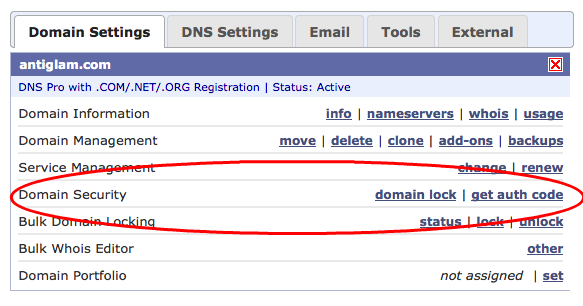 You unlock the domain, then hit the get auth code link to get your domain’s EPP auth code.

Some registrars will drop the DNS settings for your domain as soon as they see the transfer-out request. This can lead to problems as we described in “How To Transfer Your Domain Without it Going Dark“.

Fortunately, we are lazy, so when you transfer away from us, if you’re using our nameservers we don’t bother deleting your DNS until well after the next billing cycle comes around and it’s clear you aren’t going to renew. Besides, you’ve already paid us up until the end of your cycle, so it is natural to expect us to keep your DNS live until then. And who knows? You might come back.

If all else fails: easy-does.it

Domain transfers are complicated to the casual users, even geeks and netheads who are unfamiliar with the domain world it can seem arcane and twisted. So if you simply don’t want to deal with it, you can always hit the “easy-does.it” button (top left sidebar menu) and just explain to us in your own words what you need to have happen, and we’ll take care of it.

Well from what we’ve been able to tell, the biggest factor is price. So if you are thinking of leaving, we would like to point out to you that if you signed up with us back in the day, when to get URL and email forwarding you needed our most expensive of service (then known as “DNS Plus”) then you don’t need that anymore – You can access that via both the cheaper “DNS Hosting” levels of service as well as our fairly new “domainPlus” – which clocks in at a mere $15/year for domain fees, DNS, URL and email forwarding.

The most common answer we’ve gotten from people transferring out is “I don’t need all that firepower and features for this domain”, which is why we rolled out domainPlus earlier this year.

If you are leaving, we would very much appreciate any feedback you can give us via this short survey.

I meant to post this, backstory and all shortly after we lost that customer, but I held back. Once i started reading the Doc Searls book I just couldn’t take it anymore. Apologies to anybody who feels trapped here, stay tuned for even more tools to make it easy to make sure you’re using the right level service with us (yes, a one-click downgrade coming soon!) and to integrate with third-(and fourth) parties.

If you don’t want to be here, please tell us. We want to fix the deficiencies that are impelling you to leave and we want you to be at the right place for your domains, whether its here or someplace else.