Yesterday Forbes broke the news  that Canadian Calvin Ayre and partners who operate the Bodog online gambling empire have been indicted in the U.S., and in a blog post Calvin Ayre confirmed that their bodog.com domain had been seized by homeland security. As reported in Forbes (hat tip to The Domains for the cite),

According to the six-page indictment filed by Rosenstein, Ayre worked with Philip, Ferguson and Maloney to supervise an illegal gambling business from June 2005 to January 2012 in violation of Maryland law. The indictment focuses on the movement of funds from accounts outside the U.S., in Switzerland, England, Malta, and Canada, and the hiring of media resellers and advertisers to promote Internet gambling.

“Sports betting is illegal in Maryland, and federal law prohibits bookmakers from flouting that law simply because they are located outside the country,” Rosenstein said in a statement. “Many of the harms that underlie gambling prohibitions are exacerbated when the enterprises operate over the Internet without regulation.”

That is a truly scary quote but we’ll emphasize that: “The indictment focuses on the movement of funds outside the U.S.” and that you can’t just “flout US law” by not being in the US. What also needs to be understood is that the domain bodog.com was registered to via a non-US Registrar, namely Vancouver’s domainclip.

So Here’s Where It Get’s Scary… 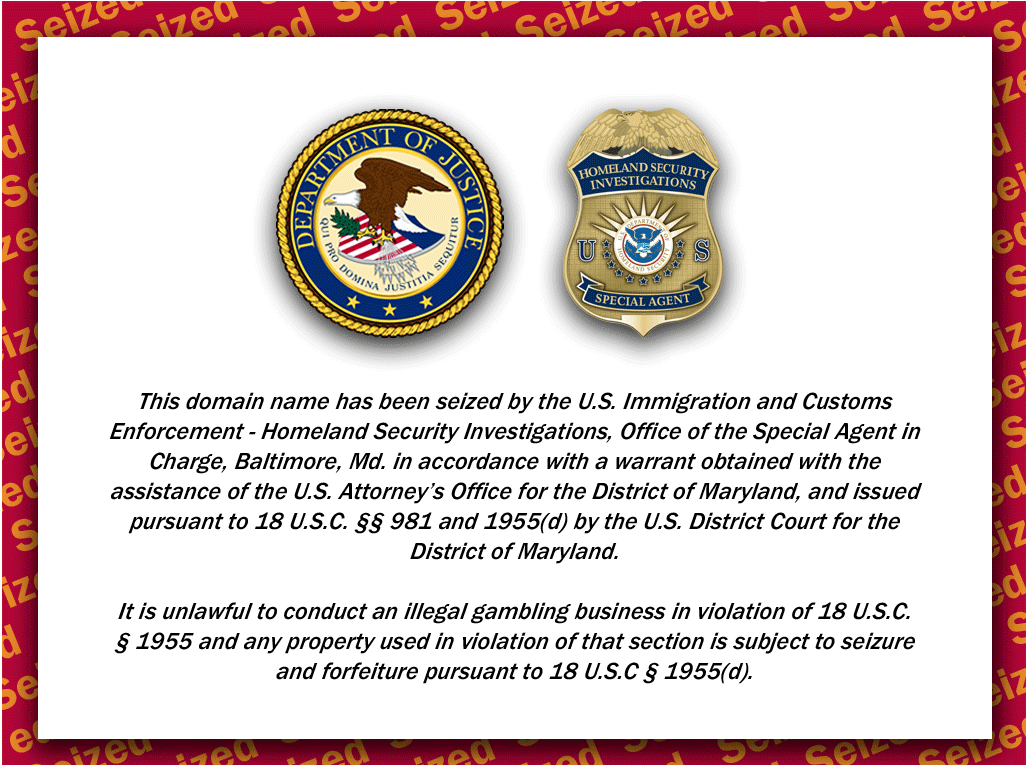 We all know that with some US-based Registrars (*cough* Godaddy *cough*), all it takes is a badge out of a box of crackerjacks and you have the authority to fax in a takedown request which has a good shot at being honoured. We also know that some non-US registrars, it takes a lot more “due process-iness” to get a domain taken down.

But now, none of that matters, because in this case the State of Maryland simply issued a federal warrant was issued in the State of Maryland[1] to .com operator Verisign, (who is headquartered in California) who then duly updated the rootzone for .com with two new NS records for bodog.com which now redirect the domain to the takedown page.

This is exactly the scenario we were worried about when Verisign originally tabled their very troubling takedown proposal. Said proposal was quickly retracted, but here we have the same situation playing out anyway. Granted, this was an actual court order, to Verisign – not a “request” from a governmental or “quasi-governmental” agency as originally proposed.

But at the end of the day what has happened is that US law (in fact, Maryland state law) as been imposed on a .com domain operating outside the USA, which is the subtext we were very worried about when we commented on SOPA. Even though SOPA is currently in limbo, the reality that US law can now be asserted over all domains registered under .com, .net, org, .biz and maybe .info (Afilias is headquartered in Ireland by operates out of the US).

This is no longer a doom-and-gloom theory by some guy in a tin foil hat. It just happened.

The ramifications of this are no less than chilling and every single organization branded or operating under .com, .net, .org, .biz etc needs to ask themselves about their vulnerability to the whims of US federal and state lawmakers (not exactly known their cluefulness nor even-handedness, especially with regard to matters of the internet).

The larger picture: root monopolies and the need to replace ICANN

The .com root will never be opened to a truly competitive bidding process. Verisign has pretty well ensconced themselves into the .com and .net roots indefinitely with built-in price hikes baked into the cake. I recall a conversation I once had with Tucows CEO Elliot Noss, back when they still owned Liberty RMS (which ran the .info registry and later sold to Afilias) – he lamented that if the .com registry bidding process were truly competitive, you would see a registry operator in there doing it for about $2 per domain. At the time the wholesale cost of a .com domain was $6 and is now $7.85 after their latest annual increase which is hard-coded into their contract.

I mention this because a truly competitive bidding process for the registry operator job would bring out both cost competition and stewardship competition: players who would table proposals on just how they would respect the rights of all their stakeholders, not to mention operators who may operate outside the United States.

Where the fsck is ICANN in all of this?

They are nowhere. They are collecting their fees, pushing their agenda of as many possible new-top-level domains and despite the fact that SOPA, ACTA, PIPA et aim directly at the interests of their core stakeholders, for whom they are supposed to be advocates and stewards.  ICANN is conspicuous in their absence from the debate, save for a smug and trite abdication of involvement (i.e. “ICANN Doesn’t Take Down Websites“) – translation: “This isn’t our problem”.

And therein lies the issue. ICANN needs to make this their problem, because it very much is. If ICANN isn’t going to stand up, and vigorously campaign for global stakeholder representation in these matters, than they are not only abdicating any responsibility in the ongoing and escalating crackdown on internet freedom, they are also abdicating their right to govern and oversee it.

Of course, the replacement of ICANN will never happen. At least not by a non-US entity, which means we are once again headed to the unthinkable place that only crackpots and conspiracy theorists think possible: a fractured internet with competing roots. On the bright side, life will go on, and companies like mine will probably become exceedingly wealthy charging every internet user in the world fees to gain and project visibility across all the myriad internet roots that will someday exist because governments will refuse to approach it co-operatively. The only thing that will remain to be seen is whether we’ll be deemed “criminals” for doing so.