On Friday night (Jan 31), a few days  after my  new book about deplatforming and cancel culture came out, the news broke that Twitter had permanently suspended Zerohedge for breaking the platform’s policies. The move was taken in response to an article penned by Buzzfeed writer Ryan Broderick which falsely accused Zerohedge of “doxxing” a Chinese coronavirus researcher. We have not amplified the false account by linking to it.

Buzzfeed, which describes itself as a global news organization has 11 million likes on Facebook and more than 7 million followers on Twitter is run by Jonah Perretti, a Huffington Post co-founder and repeat-offender engaging in identity theft. The site has a long history of promulgating discredited Russian collusion narratives, multiple instances of plagiarism, and has been the subject of myriad defamation and copyright violation lawsuits.

Over the weekend the article’s author, Ryan Broderick, had his own social media effluences undergo a crowdsourced purity review and he didn’t exactly pass with flying colours. Old tweets surfaced, he’s the one doing the doxing in this one, tweeting out a Pastebin link inciting targeted harassment (a violation of Twitter rules, btw)

Someone put together a pastebin of contact info on Amy’s Bakery Company http://t.co/VvZjX1indv for prank calls http://t.co/C94YFpfalP

and another revealing himself to be a self-professed hebephile (a hebephile is an adult with a sexual predilection toward pubescent adolescents, aged 11-14)…

Mr. President, can you please pass legislation legally defining the difference between us good-natured hebephiles and amoral pedophiles?

….not to mention several entries in an old Tumblr which are…. disturbing. I don’t know… is it racist to say “All black people smell like cocoa butter” ? You tell me, and you have to decide without looking at whether the Twitter profile has a blue check mark.

Normally I wouldn’t pile on to highlight any individual’s mental kinks, but given the tendency on the part of the cancel culture crowd to stake a claim on the moral high ground as the basis for their rationale on who should have a platform and who shouldn’t, it somehow seems relevant.

Zerohedge is an easyDNS client.

This alone is not newsworthy. We have all sorts of clients from across the range of discourse. Both Antifa and BLM had their DNS here for years. Had either one of them faced a takedown like this, our response below would be the same (we did receive numerous requests to take down both sites over the years and they all received variations of our standard issue “go to hell” response).

But in the case of Zerohedge, that site routinely runs my own Guerrilla Capitalism posts, and before that several articles from my old Rebooting Capitalism blog.

I started following Zerohedge in the aftermath of the Global Financial Crisis because they were the only clueful financial / economic outlet that was not simply regurgitating CNBC / Bloomberg talking points. In these 10+ years since the financial crisis, there is a growing awareness outside of the mainstream financial press that the policy response was wrongheaded and harmful. It exacerbated wealth inequality via Cantillon Effects, the banker bailouts were a travesty whose consequences are only beginning to be felt, and it set the global economy up for another, even bigger credit crisis.

It is by definition contrarian to hold these views, and to do so publicly earns one derision and scorn. Zerohedge has been one of the main outlets giving a platform to these renegade views on economics and it’s no surprise to me that the mainstream media and finance/political/globalist establishment wouldn’t mind so much if Zerohedge somehow “went away”.

More than once, topics that mainstream pundits have dismissed as “conspiracy theory” on Zerohedge’s part have turned out to be, in reality, prescient calls which were then minimized as irrelevant by those same pundits.

I’ll admit, when Zerohedge ventures outside of economics / finance / markets they are outside their circle of competence and they tend to veer toward sensationalism (in a way that, say, Buzzfeed, CNN, Fox, HuffPo never sensationalize, amiright?)

However, nobody is perfect, and not getting everything exactly right is not a valid reason to deplatform them.

In the video Patreon CEO Jack Conte pleads his case that they’ve dreamed up a system which removes all subjectivity from the platform/deplatform equation. However, as I lay out in the book, it’s impossible to remove subjectivity from an abuse / AUP judgement call. It’s hard enough to get it right with respect to what is happening on your own system; that to expand your so-called “jurisdiction” to what happens off your platform is an act of hubristic grandiosity.

The reality is that nobody can remove their subjectivity from any process that involves a judgement call. A lot of these tech platforms seem to think it’s incumbent upon them to judge what is the mind of others, the intent of others, the possible outcome of other people’s actions. Not to mention that when they do, they are frequently, in essence, adjudicating international law.

In this case, Twitter suspended the account based on either an uninformed take of Zerohedge’s off-platform article (they never bothered to look to see that they didn’t dox anybody) or a completely subjective and kneejerk response to it.

It’s disturbing to consider the logical extensions that would arise in a world where all manner of private entities are taking it upon themselves to render judgement and level sanctions on others. If Twitter is any indication, it would occur with a complete absence of due process combined with a prevalence of favouritism and two-tier hypocrisy. One set of rules for the Blue Checks, and another set for the nobodies. It would quickly devolve into a dystopia even worse than that “Nose Dive” episode of Black Mirror.

The antidote to stopping the flow of “fake news”

Given the obvious hurdles of granting the power to literally define truth to an unelected, unaccountable clique of well connected and exceedingly wealthy mavens, the answer is simple, but not easy. There has to be a renewed refocus on teaching the lost art of critical thinking to all members of society, starting in school (at the latest) and continuing throughout.

When I combed through Ryan Broderick’s Substack and Medium posts, I found it entirely devoid of substance or critical thought. It was mostly self-referential pop-culture quips that deign to make newsworthy the incessant, never-ending brain farts that everybody experiences, but that more refined intellects aspire to attenuate.

I don’t like it when midwits like this have the ability to impact what I see in my social media intake. Neither should you.

It’ll be interesting to see if Twitter reinstates Zerohedge’s account, especially after these revelations of hebephilism and racist tropes surrounding the original author have emerged. But in any case, Zerohedge will be largely unscathed by this. Over the weekend they confirmed to us that traffic their website was up markedly, over 40%, as a response to the increased publicity.  The number of hits from Twitter is higher now than before the ban. Exactly as one might have predicted after reading Chapter 4 of my book, “Does Deplatforming Even Work?“, to which the short answer is…. mostly, it doesn’t.

We have also suggested to them moving their microblogging feed to a Mastodon instance which would feed into Twitter, either via a reinstated official Zerohedge account or by anybody who so desires to create accounts there to syndicate the Mastodon feed.

All of the above, the increased traffic after the suspension, the ability to keep there core outlet (their website) unscathed, the move to a decentralized microblogging platform out of the control of woke messianic personalities is in line with the blueprint and approach outlined in Unassailable.

You may be thinking, “But Mark, shouldn’t you, the libertarian, recognize the right for companies to lord over their property?”

You would be right, and this is something I’ve wrestled with. Personally I’m wary of anyone who doesn’t wrestle with cognitive dissonance and who doesn’t constantly test their own beliefs with difficult edge cases. I mention this as well in the epilogue of Unassailable.

Where I eventually landed on this is: I don’t think this is the type of thing that mandates further government intervention as these incumbent entities are, once again, incentivizing their own disruption. If there’s one thing this era has taught us, it’s that no matter how large and entrenched any given 800 pound gorilla is, they can be swept aside into irrelevance with ever increasing speed.

If governments were to intervene, it would be more likely in the form of increasing regulatory burdens that increase the incumbents’ defensive moats than to guarantee freedom of expression for all.

Learn more about Mark E. Jeftovic’s second book Unassailable: Protect Yourself From Deplatform Attacks, Cancel Culture and other Online Disasters by clicking here, or pick up a copy from your preferred bookstore below. 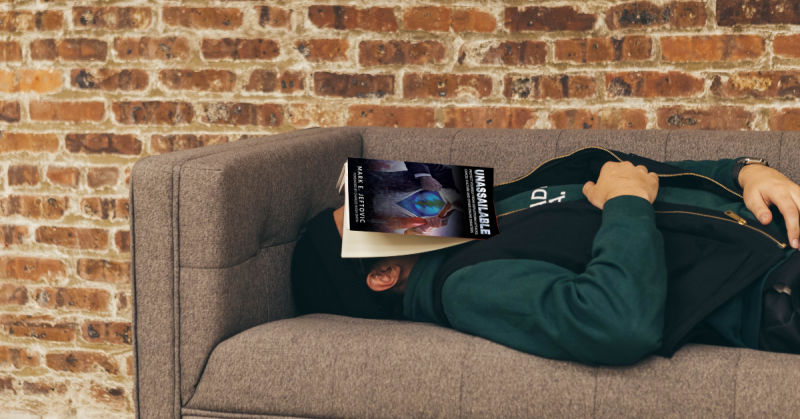