This is my belated obligatory post about the entire “Apple vs the FBI” episode and whether it should help decrypt the San Bernardino shooter’s iPhone. People have commented that I should write something, and I’ve been reluctant in case I go off in full-rant-mode.

I wrote the entire post and then after I re-read it and thought about it I realized that normally this should not be a big deal. In the presence of a clear crime having been committed, and LEA presenting a legal court order to Apple, this should be a no-brainer. Help them crack the damn phone already.

But it’s more complicated than that, because “The State” is operating from a position of zero credibility, and when you combine that with the proverbial “slippery slope”, it gets really messy.

The debate isn’t so much about whether law enforcement needs backdoors into security systems or even whether having one would prevent terrorism (but it is about whether doing this, as a “one time thing” could lead to institutionalizing this kind of security weakening to the benefit of The State. FBI Director James Comey wrote on Sunday night that it won’t. Indeed Comey himself makes the request sound reasonable, grounded and fair. Who wouldn’t comply?)

But the debate has to start at the point where the Government has  has violated the trust of the American people, not to mention broken the law themselves by already conducting wholesale surveillance of the citizenry (among other travesties).

Tim Cook’s counterpoint that there needs to be a public consultation involving LEA, State agencies (including intelligence), private sector and privacy advocacy is along the lines where we need to start. After all, the San Bernadino shooters are already dead, decrypting their phones now isn’t going to change any outcomes.

Thus, the number one issue, the issue that should preempt all other issues, is how the government regains it’s credibility and re-establishes trust.

Until that can happen, then the responsibility for any crimes or acts of terror that occur that are in any way aided by encryption rests entirely on

Because the illegal wholesale surveillance of the citizenry is nothing short of Orwellian and totalitarian. Combined with a level of ineptitude that typically accompanies most state sponsored initiatives, it means that The State is making these requests from a vacuum of zero credibility and that any backlash in the form of civil disobedience and private sector recalcitrance is largely self-inflicted.

Since the State won’t do what’s right by it’s citizens (and no, squashing their civil liberties into dust and telling them it’s for their own good isn’t what’s right), citizens and private enterprise (while it still exists) will react to these realities in their own way. As they should.

Amid arguments of “preventing terror” (both in the context of this issue and in the larger context), it astonishes me how few Americans live by Ben Franklin’s observation that “those who would trade liberty for security deserve neither”. Remember this: more Americans are killed by their own furniture than by terrorism. 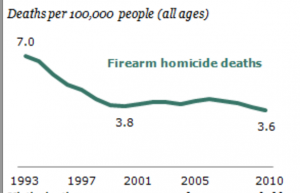 Further, if you think that shooting sprees in themselves have gone way too far and government needs backdoors into your business to stop them, then you should also know that medical malpractice kills 15X more Americans than all murders by guns (and shooting sprees only account for approximately 3% of all gun murders, and gun murders overall are in a secular decline, down nearly half over the past 25 years).

What other fates can we save ourselves from if we  beseech the government to run a police state to “fix it” ?

So far this year compared the roughly 1,700 gun deaths in the US:

And people want to enable an arguably incompetent, power-mad State apparatus to have a backdoor into everything?

No thank-you, I’ll take my chances and keep my encryption. Why? Because it’s none of your [expletive deleted] business. That’s why.