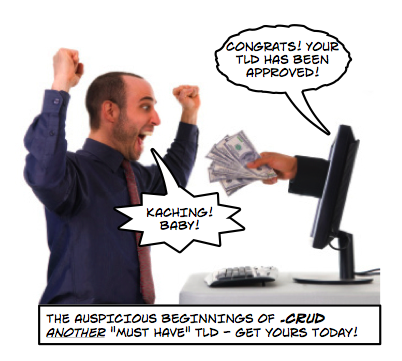 It’s been a long time coming, but as of a few months ago, the onslaught of the new Top Level Domains (“TLDs”) has commenced. This is quite the game-changer because the sheer volume of new TLDs necessitates a different strategy for protecting one’s interests than was the general convention of the past.

In the past, everybody (except maybe us), would try to whip all their customers into a frenzy around the concept “Get your name under [dot]whatever before somebody else does!” (We were usually a bit more stand-offish about it, being deeply skeptical of that entire model).

Not every new TLD should be “defended” in, with rare exceptions. .CO for example, was pretty much set up to capitalize on being one big typo-squat on .COM. (Of course they’ll never admit that.)

So now the new landscape is upon us: new TLDs are coming out so fast we can’t even keep track of them ourselves. We’ve added support for a few of them and they are available now:

These can be registered immediately by logging into your account, and enabling them in your account preferences. (We’ll add more as they come up, if you’re aware of one you’d like that we haven’t added yet, just contact support.)

There’s just too many of them coming out over the next few years (it’ll be well into the hundreds or even thousands) and most of these new TLDs are priced a lot higher than .COM’s or .CA’s. Some of them are just too plain weird to contemplate (like for .WED there are all kinds of weird rules around it and to renew a .WED domain for more than 2 years they want you to pay something like $25,000/year! So some of these new TLDs are just so comically absurd that absolutely zero registrars are signing on to actually support them…)

There are a few new TLDs of interest to keep an eye on: .WEB is rare in that it doesn’t totally suck as a TLD suffix, I can see myself wanting some .WEB domains, but there are competing bids for it and already a few lawsuits.

.CORP will break a lot of stuff. Long story, but “corp” is a pretty common hostname within organizational intranets when the .corp TLD gets delegated (if it does) LOOK OUT! All kinds of stuff is going to break and it’ll be a really fun day for everybody remotely involved in the internet. I predict more sysadmins will throw themselves out of windows than bankers did on Oct 28th, 1929.

So how do we really feel about all this?

On one hand, we understand that time marches on, and the namespace had to expand at some point. We welcome that as a general principle.

But the manner in which the expansion has been conducted leaves a lot to be desired. First the artificial scarcity for years and years and then the floodgates open and not a lot of imagination has gone into any new TLDs beyond “get your name before somebody else does” and “everybody organize yourselves into some vertical we define”.

It all seems so 1998-ish. Can’t somebody come up with a compelling reason to create a new TLD? Something that has nothing to do with “get your name!”.

New naming models built around the Bitcoin blockchain ledger model are a lot more creative and innovative. First with Namecoin and now Ethereum, we have new namespaces being opened up that will succeed or fail purely on the value and uptake they earn in the market. The ideas of using blockchains and naming to create Decentralized Autonomous Corporations for example, are doing all the heavy lifting on the innovation side that is conspicuously absent from all of the ICANN sanctioned new TLDs.

I guess that shows you the difference between monopolies bolstered up by artificial scarcity and pure market driven innovation right there.

So which TLDs should you “register your name under?”

Take the tried-and-true Frank Schilling model: try to get .com/.net/.org and the ccTLD of your home base country. Then beyond that, get the ones you like or the ones that have at least a modicum of rationale behind it that meshes with your interests (for example some of the new city based TLDs like .BERLIN or .NYC may be of interest to local businesses there, which by the way, you can already do here in Toronto with .TO)

But beyond that, don’t get panicked into trying to “defend your name” in every new TLD that comes out because that’s a suckers game.