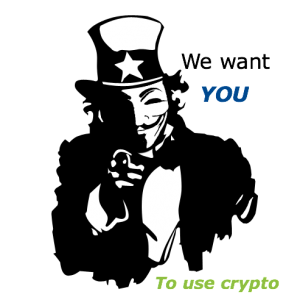 Today is The Day We Fight Back, a global initiative to send a message to our overlords that we’re not thrilled about being spied on, subject to mass surveillance and basically living in an Orwellian nightmare.

Ordinarily we’re not big “joiners” or “petition pushers”, we think taking action has more efficacy. However, this is in it’s own way doing just that. It is simply unfathomable to me how low on people’s radar this issue is.

When the first revelations began surfacing that the NSA had basically implemented a surveillance state, I commented privately “just wait, eventually it will come out that Canada is doing the same thing”.

Sure enough, reports started to surface about CSEC’s activities, first engaging in industrial espionage against trading partners and then more recently, setting up wifi honeypots in Canadian airports to track Canadian citizens.

What surprised me was the lack of reaction from the populace here about this latest revelation. Trust me: this isn’t just about an experiment in an airport tracking metadata, it’s just the tip of the iceberg.

A lot of people like using us because we’re not in the USA, and some of the rationalizations behind that perceived benefit still hold true: somewhat saner copyright laws (at least for the moment), not being wimps when it comes to idiotic takedown requests, et al.

But the idea that we are somehow “out of reach of the NSA” is definitely not one of them. Sure, we’re not actively collaborating with them, as many US businesses are, but as we’ve said before: we just assume the pipes going into and out of our major network exchange points are being vacuumed en masse.

That’s why we recently rolled out GPG encrypted email forwarding and will soon make it available on easyMail where it can encrypt your IMAP mailboxes. It’s why we’re going to spin out a personal privacy appliance fairly soon.

Because signing petitions is all well and good,  the anarcho-libertarian in me (not speaking for the entire company, or then again maybe I am) suspects that the political system we live under here in the “the Globalized World Order” is more or less bankrupt, corrupt and has lost all legitimacy to rule. It doesn’t matter if next election one political party says “we’re going to conduct a review of our intelligence agencies” and the other one says “we’ll have a full public inquiry!”. That’s not a choice. There hasn’t been real choice in the political menu in decades. So citizens can scream as loud as they want that “this is wrong!”, it isn’t going to sway our overlords from the current path.

That’s why it’s up to all of us to do it ourselves: start using crypto, take a look at things like bitcoin. Become hard to surveil, not because you’re “doing nothing wrong”, but because the government is.