There seems to be a growing backlash across the internet in response to Godaddy CEO Bob Parsons and what is being called his “Elephant Snuff Vid”. It was a video he made while on a recent vacation in Zimbabwe wherein he kills a “problem” elephant and saves the day for a local farmer whose crops were suffering the worst of it.

(As an aside, it is less known that I too was recently on vacation: in Barbados. I made a video of my own. For the first time in my life I went to a Karaoke bar and I actually sang – butchered more like it – Spencer Davis Group’s Gimme Some Lovin’. I have reviewed both videos and concluded that the one I made is too horrific to be released over the internet.) 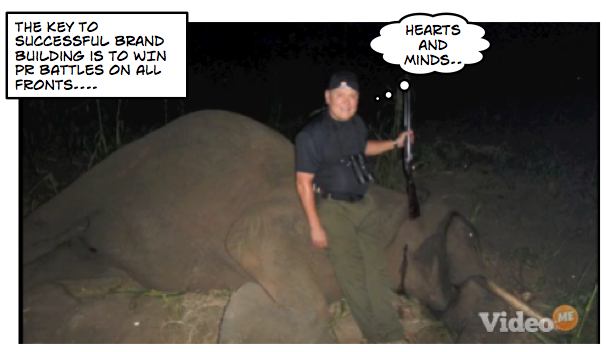 But on a serious note, the claim that the elephant was a real problem for the farmer is tenuous. Not that it wasn’t true, but that one must think it possible to help the farmers without killing the elephant (an endangered species to say the least).

Given our own recent experience with popular reactions, backlashes and boycotts in the wake of the recent “wikileaks fiasco“, I consider myself somewhat of an accidental expert in the field and the main question that comes to my mind (especially after watching the video) is “what was he thinking?”.

I understand the desire to help impoverished farmers. I am aware that Godaddy contributes to charities, etc (so do we, but we typically do it without a lot of fanfare). But what did he expect was going to happen, posting this video? Complete with the AC/DC music over a near food riot, a wild mob literally rending an elephant to pieces and he thought this was going to go over how???? I just don’t get it (but I’m frequently told that “I don’t get it”).

There is a school of thought that says “any publicity is good publicity”. That school is wrong. Especially on the internet. That old, outmoded cliche that as “long as they get the name right, who cares what they say” may work for punk rock bands and Charlie Sheen. But it doesn’t work when you can lose your customers in the click of a mouse. When people can read a tweet, stop using your service and tell a lot more people to do the same in less time than it takes to yawn, then your business better stay “on message”. And that message had better consistently be “we are not sociopaths”.

We’ve probably been getting some run-off customers from this. We always do when somebody drops the ball. This is the nature of the business. We had our turn and we lost a bunch of customers back in the wikileaks thing (I think the most vexing thing about that one was that it was a total fluke, we didn’t even do anything. We certainly didn’t go kill a whistleblower and post a video of it to youtube).

If there’s one thing that has come out of all this however, is some awareness around both the plight of the elephant and the Zimbabwean farmers. So with this in mind, we’re going to make a donation to the following:

And we encourage anybody else who’s worked up over this to make a similar donation.